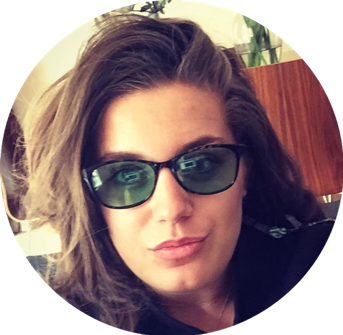 Cool sunglasses, right? Wrong. These are tinted lenses prescribed by an Intuitive Colorimeter Test. People with learning difficulties such as Dyslexia often experience visual problems such as Meares-Irlen Syndrome (Visual Stress), a common misconception of a reading difficulty.

Doesn’t Dyslexia mean you are just bad at Spelling?

Dyslexia is indefinable due to its heterogeneity in individual conditions. Common Dyslexic symptoms are poor spelling and grammar which result in the condition being widely misunderstood. Consequently, the condition is viewed as a disability not a difference.

I am not shy that I have Dyslexia and was once asked in an interview whether this meant I was unable to send emails? Of course, my response was very dry…  I am delighted to say that I was not right for the role and my application did not go any further.

Were they right? Do the deficits of Dyslexia outweigh the advantages?

From my experiences, deficits include spelling and grammar, and slower processing speeds of written and verbal information. This often leads me to have a lazy appearance or poor attention to detail. On a day to day basis, this causes difficulties in emails or having to write content, without relying on others to proof-read, which is often not possible as I often work on my own at home.

This is particular issues in Job Applications and Interview Process as these are not the traits you want to be displayed.  It is not surprising that in a 2013 study it was recorded that 41% out of 1000 unemployed candidates were Dyslexic.

Why would I want to hire someone who is lazy and slow?

Besides the fact that discriminating someone against their disability, or not providing them with Reasonable Assistance is illegal thanks to the 2010 Equality Act. The Advantages to Dyslexia are often unknown but can be highly powerful, especially in a soon to be automated Economy where Soft Skills, Emotional Intelligence and Creativity are a scarce resource.

A couple of month ago, I was lucky enough to speak to Chris Arnold, Founder of ‘the Garage’. I asked him advice on his career as a dyslexic and whether I was doing something wrong as my abilities never truly represented what I was outlining in an application or interview. 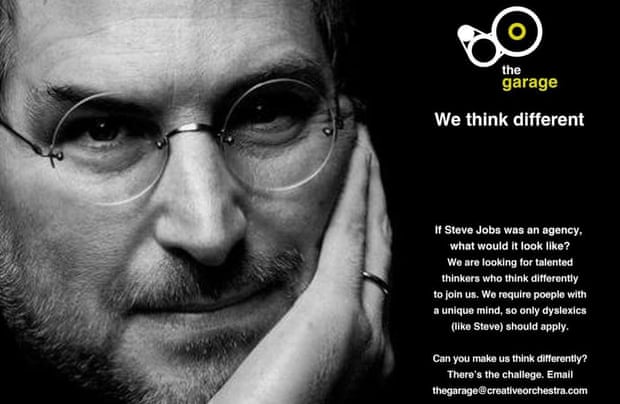 Instead he told me to promote awareness about the strengths of Dyslexia and I suppose I am writing this piece now… However, I must include some of Chris’s quotes around Dyslexia as I cannot describe the potential advantages better myself:

“If you wanted to assemble the world’s best choir you’d want great singers, not tone-deaf ones. We are simply looking for the best innovative thinkers and they are usually dyslexics,”

“Dyslexia isn’t a disability, it’s an inability in an linear environment, but a great ability in a creative one. Dyslexics are great at creativity, imagination, strategic thinking and problem solving.”-Chris Arnold

Were ‘the Garage’ rightly criticised for being Discriminatory against non-Dyslexics?

I can see that the Ad does discriminate against non-Dyslexics. From a Dyslexic perspective, I wonder whether the opportunity would have been Equal if the Ad no longer included ‘Only Dyslexics (like Steve) should apply’. It is impossible to know without conducting a study, but the seed has been planted…

If being Dyslexic is so good for a company… Should I disclose it?

This question has been asked to me Hundreds of times. My response is that it is personal preference. My personal opinion is that I would not want to work for a company that is “naïve” to the advantages nor to one that does not accommodate me. Take the example I gave about the Interviewer asking whether I was able to send emails. With that kind of lack of belief in your ability you would firstly, struggle to progress within the organisation and secondly, never be able to have the autonomy to use your Dyslexic Skills. Most Importantly, why would you want to work there anyway?

Pip Jamieson, CEO The Dots is a Dyslexic serial entrepreneur. Last week she spoke at a Female Entrepreneur Breakfast, I could not resist myself from asking her how I could prevent myself from looking like a Lazy, Mad Woman but rather as a creative individual with bad spelling… She advised me to acknowledge that I am Dyslexic rather than keep apologising. She combats this by including “Delightfully dyslexic, excuse typos!” in her email signature. I now include the tag #DyslexicandProud in most Web, Social Media and Email Content.

Do you need a more Creative Workforce or are interested in becoming more inclusive…Stay tuned to find out how to make your Workplace more accessible to Dyslexics or contact me directly if you can’t wait!

One thought on “Having a Disability does not mean your Disabled!”