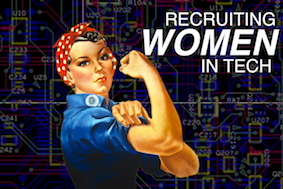 Why does it even matter?

It is a known fact that there is a huge gender gap in the technology industry with only 6% of technology workers female. But why does it matter? Who even cares? I think that women should care. The digital sector contributed £97billion to the 2015 UK economy. This increased digital jobs by 85,000 now totalling an estimated 1.64 million. With automation and augmentation having consequential impacts on the future of jobs, can women afford not to adapt their skill set in the fear of being left behind of technology’s social shaping?

Why should businesses care? From 2017, organisations with over 250 employees must comply to the Government Equalities Office Gender Pay Gap Reporting. This includes whether every relevant employee and full-pay relevant employee identifies as male or female.

Men are creating technology with the male consumer in mind resulting in male designed technologies that are unattractive to the female consumer. Women make up 40% of all technology products and 55% of all gaming consumers. Can they afford to lose this market segment? Consequently, technology companies with more women on their management teams, receive 34% higher investment returns.

There has been a broad failure to adequately conceptualise studies and build explanatory theories in entrepreneurship literature. Existing literature has been divided into female entrepreneurship and branches of feminism within technology, there has yet to be a combination of research to attempt to understand why there is a minority of women working in the technology industry. By attempting to understand the barriers and challenges that are currently being faced, there is an opportunity to understand how the technology industry can adapt to encourage more female workers.

Meeting the women who work in technology:

To fully understand this phenomenon, I conducted five interviews with female techpreneurs and supported their stories through informal ‘observer as participant’ observations. As expected, I did have initial concerns about data collection, as the nature of the study assumes the deficit of women in technology.

What was surprising in a stereotypically young, male dominated industry, was that the interview participants demographics supported existing theories of female entrepreneurship. Existing theories suggest that there are defining characteristics of a female entrepreneur: mature in age, educated and prior business experience. Similarly, the participants were aged between 30-41, educated to degree level or higher, had no children and 80% had a long-term partner.

The data suggested that there were four key themes; Work Life Balance, Support Network, Men in Technology and Recruitment.

The need for increased flexibility was prominent throughout the interviews and in observations. Additionally, 80% of the participants stated they had left their previous roles in a corporate environment to achieve a work life balance.

We are currently witnessing a modern alignment of technology and society. Society is changing and industries such as technology are helping to redefine the meaning of a family and their working relationship within society. As mentioned, women cannot afford to not be a part of this social shaping.

Despite my initial concerns that the data collection may be difficult, I was proven wrong. The need for a strong support network was empirical to their individual success. Improving and spreading access to a support network for female techpreneurs may help bridge the gender gap in the tech industry. Support networks can be in a multitude of forms: female entrepreneurship communities, women in technology communities or supportive families, partners, mentors and friends.

On the contrary, many of the participants experienced a ‘closed door policy’ in their career. This can be explained by a high level of competition between women as they have the desire to be within that 6% and ‘beat the others to it’.  I personally experienced this in the data collection. A potential candidate was transactional in nature when deciding whether to participate in the research, so much so I was forced to remove her data as I feared it may be unreliable.

A supportive man is key to bridging the gender gap, with participants subjective in their reasoning but none the less prominent. Acknowledgements and recognition may influence others to engage in the mission.

However, the majority of male’s attitude and behaviour is the biggest challenge currently being faced by women. There are three defining reasons. Firstly, the male majority itself is its own barrier to entry. This is due to cultural implications creating a masculine perception of the industry and deterring women from entering. Secondly, their aggressive behaviour and thirdly, their lack of professionalism. The fairly recent boom of emerging technologies has resulted in technology employees coming straight out of University, meaning they have a lack of corporate experience. Consequently, women are being forced to overcompensate their knowledge, skills and abilities to prove themselves and the aggressive and unprofessional industry is an unpleasant working environment.

Recruitment techniques and strategies are currently unsuited to women applicants. The aggressive work environment previously discussed, is being reflected in job descriptions and it is not surprising to know there has been a 5% decline in women working in the technology sector.

Male workers in technology are stereotypically shy or awkward in nature. This is the same for women with the addition of a lack of self-confidence. An example of this difference is if a man sees a job description and can do 50% or more he will apply. In the same situation, if a woman saw a word she did not understand, she would not apply.

What can we do about it?